1. The water on our planet has likely been around in one form or another since the time of the dinosaurs!

2. 70% of Earth’s surface is covered in water but 97% of that is in the oceans, meaning it’s too salty for us to drink without significant work and energy.

3. The remaining 3% of the water on the planet is freshwater but 2% is locked up in glaciers and ice at the North and South poles, leaving only 1% of the Earth’s water available for us to easily use.

4. Much of Florida’s water comes from an aquifer (an underground network of caverns that water flows through) and the water is brought to the surface through springs.

5. Some areas of the planet have too much water and some areas don’t have enough. Florida is not currently experiencing a drought but has in the past.

6. In the United States, the average person uses ~100 gallons of water per day, when you factor in the amount of water used for drinking, cooking and sanitation as well as producing food and clothing.

Why should I worry about conserving water?? It’s not like I have to go collect it from a river or something…I just turn on the faucet and it’s there!!

We’re pretty lucky!! While Florida has experienced droughts in the past, we have not yet had a situation where our water supply ran out. Unfortunately, that can’t be said for the rest of the world. Barcelona (Spain), Sao Paulo (Brazil) and Cape Town (South Africa) have all experienced significant water shortages in recent history and have had to make drastic adjustments to how water is used in those cities.

Most of the water on the planet is ocean water. Ocean water can be transformed into available water for us to use through a process called desalinization but it is expensive and can have negative environmental impacts, like contributing to greenhouse gas emissions and producing contaminated water.

Only 1% of the Earth’s water is readily available for our use, meaning our planet of over 7 billion people is using 0.007% of the planet’s water. We should probably be pretty careful with how we use it, right??

You may already be doing many of these at home but here are some easy ways to conserve water:

1. Turn off the tap while brushing your teeth or washing your hands.

2. Use a shower bucket–instead of letting the water pour down the drain, stick a bucket under the faucet while you wait for your shower water to heat up and then use that water to water your plants. This can also be used when making a dishwater to wash dishes!

3. Fix water leaks when you find them.

4. Don’t run your dishwasher or washing machine until it’s full.

5. Use a rain barrel to water your plants instead of using water from the hose.

6. Instead of running water the entire time you are washing dishes, make a dish water and leave the faucet off until it’s time to rinse.

7. Skip the shower from time-to-time (your kids will love this one!!).

Like any new habit, start by making small changes. Once those changes become easier, add some new ones in. All of us making little changes every day will add up to a huge savings on our water usage!! 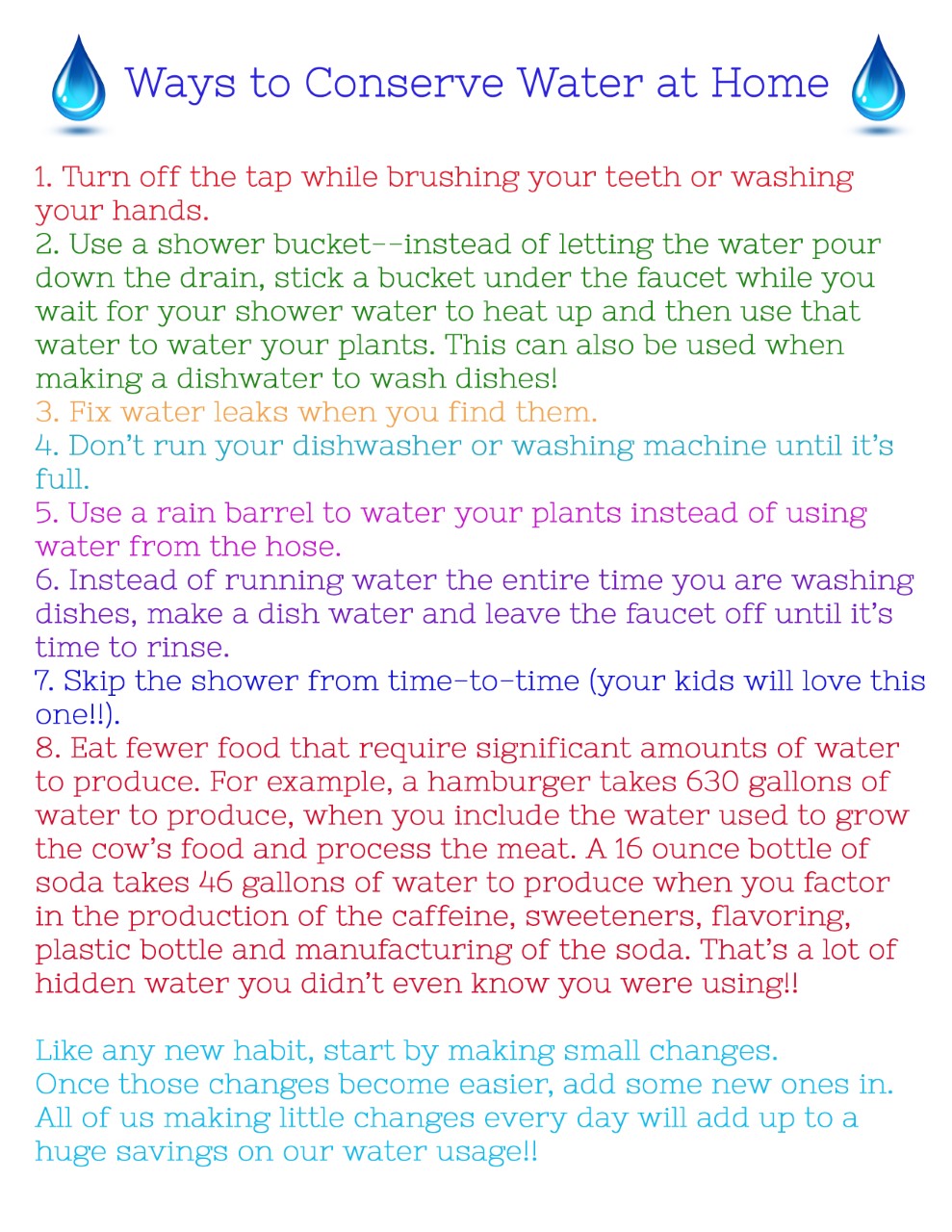